Charcot-Marie-Tooth disease (CMT)is one of the most common inherited neurological disorders, affecting approximately 1 in 2,500 people in the United States. The disease is named for the three physicians who identified it in 1886 - Jean-Martin Charcot and Pierre Marie in Paris, France, and Howard Henry Tooth in Cambridge, England. CMT, also known as hereditary motor and sensory neuropathy (HMSN) or peroneal muscular atrophy, comprises  of disorders that affect peripheral nerves.  Disorders that affect the peripheral nerves are called peripheral neuropathies.
Professor Bob
Imperial College London

What are the symptoms of Charcot-Marie-Tooth disease? . A typical feature includes weakness of the foot and lower leg muscles, which may result in foot drop and a high-step gait with frequent tripping or falls. Foot deformities, such as high arches and hammertoes (a condition in which the middle joint of a toe bends upwards) are also characteristic due to weakness of the small muscles in the feet. In addition, the lower legs may take on an "inverted champagne bottle" appearance due to the loss of muscle bulk. Later in the disease, weakness and muscle atrophy may occur in the hands, resulting in difficulty with fine motor skills.Onset of symptoms is most often in adolescence or early adulthood, however presentation may be delayed until mid-adulthood.  Pain can range from mild to severe, and some patients may need to rely on foot or leg braces or other orthopedic devices to maintain mobility. Although in rare cases patients may have respiratory muscle weakness, CMT is not considered a fatal disease and people with most forms of CMT have a normal life expectancy. 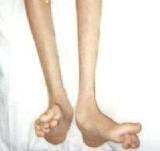 What are the types of Charcot-Marie-Tooth disease?

There are many forms of CMT disease, including CMT1, CMT2, CMT3, CMT4, and CMTX. CMT1, caused by abnormalities in the myelin sheath, has three main types. CMT1A is an autosomal dominant disease resulting from a duplication of the gene on chromosome 17 that carries the instructions for producing the peripheral myelin protein-22 (PMP-22). The PMP-22 protein is a critical component of the myelin sheath. An overabundance of this gene causes the structure and function of the myelin sheath to be abnormal. Patients experience weakness and atrophy of the muscles of the lower legs beginning in adolescence; later they experience hand weakness and sensory loss. Interestingly, a different neuropathy distinct from CMT1A called hereditary neuropathy with predisposition to pressure palsy (HNPP) is caused by a deletion of one of the PMP-22 genes. In this case, abnormally low levels of the PMP-22 gene result in episodic, recurrent demyelinating neuropathy.CMT1B is an autosomal dominant disease caused by mutations in the gene that carries the instructions for manufacturing the myelin protein zero (P0), which is another critical component of the myelin sheath.

CMT2 results from abnormalities in the axon of the peripheral nerve cell rather than the myelin sheath.

CMT4 . Patients with CMT4 generally develop symptoms of leg weakness in childhood and by adolescence they may not be able to walk. The gene abnormalities responsible for CMT4 have yet to be identified.