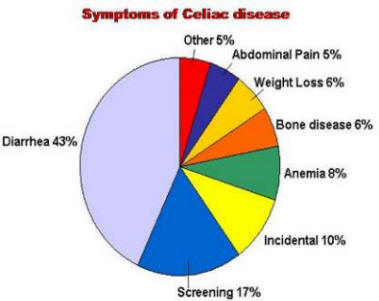 Link to JFK Celiac connection My symptoms started  I would assume at birth. Very thin child. Stayed very thin and the protruding stomach, the popped out bellybutton. That continued along with a lot of constipation during my preadolescent years. As a child I think it affected me mostly because my mother was so upset by my being so thin. She gave me cod liver oil, she gave me medicine iron  she gave me iron. She would give the old folks, SS Tonic to try to make me gain weight and look normal. And of course she made me eat biscuits.

And I did well in school  no problems. Up until age 12 when I started having the very severe stomach pain. We went back to the doctor, still with the same complaint. And he decided the only way to know what was going on was to do an exploratory surgery. And they opened me up, took my appendix out because I was opened up, and told my mother that, yes my intestines were inflamed but they didn't know why. Sewed me back up and I continued on with my life with all the pain and nothing changed.

We have our experience based upon 12000 patients USA.

was very frustrated. And now that I look back, I am pretty angry that they did not  know, maybe look at a medical book to see what might cause this inflammation. It is pretty amazing that they could look at my intestine, see that it is inflamed and not look for a reason. It seemed to get a bit better in my 20s and 30s and occasionally a stomach ache. And then with menopause it came back with a vengeance. And I just struggled to get through the day. I did go home. I would get dinner and just collapse.

And I told my daughter, who worked for the autoimmune clinic at NIH that I did not know what was wrong, but something just was not right. I said, "I am already at NIH why don't you write letter to the liver specialist  or to the autoimmune clinic at NIH and have them refer me over to the liver clinic. And she did. I went to the liver clinic. A young doctor from South America, Dr. Sosa, interviewed me. And this dear man listened to all of it, and then he said, "You do not have any symptoms of liver disease. So I am going to take the 12 vials of blood and look for rare diseases."And a week later he called and he said, "You know those rare disease I checked for? You do have one of them. And it is called Celiac."

Emotionally, to learn that I had an actual disease that explained everything was such a relief. And to know that I could get better was like being given the best Christmas present ever.

I am Sue . And I am living my life with Celiac Disease.

continue to what is Celiac Disease

Services: About CIDPUSA.ORG We provide alternative information for treatment of autoimmune diseases. This is a 5000 page web site SEE SERVICES LINK