The CNS consists of the brain and spinal cord. It acts as the central control region of the human nervous system, processing information and issuing commands.

The autonomic nervous system (ANS) is the command network the CNS uses to maintain the body's homeostasis. It automatically regulates heartbeat and controls muscle contractions in the walls of blood vessels, digestive, urinary, and reproductive tracts. It also carries messages that help stimulate glands to secrete tears, mucus, and digestive enzymes.

The nerves (Figure 01b) that are easily visible to the unaided eye are not single cells. Rather, they are bundles of nerve fibers (neurons) each of which is itself a portion of a cell. The fibers are all traveling in the same direction and are bound together for the sake of convenience, though the individual fibers of the bundle may have widely differing

functions. There are no cell bodies in nerves; cell bodies are found only in the CNS or in the ganglia. Ganglia are collections of cell bodies within the PNS.

The main portion of the neuron, the cell body, is not too different from other cells. It contains a nucleus and cytoplasm. Where it is most distinct from cells of other types is that out of the cell body, long threadlike projections emerge. Over most of the cell there are numerous projections that branch out into still finer extensions. These branching threads are called dendrites ("tree" in Greek). At one point of the cell, however, there is a particularly long extension that usually does not branch throughout most of its sometimes enormous length. This is the axon (the axis). Figure 01b shows the three parts of the neurons: dentrite(s), cell body, and axon. A dendrites conducts nerve impulses toward the cell body, the part of a neuron that contains the nucleus and other organelles. An axon conducts nerve implses away from the cell body. There are three types of

neurons: sensory neuron, motor neuron, and interneuron. A sensory neuron takes a message from the recptors in the sense organ to the CNS. A motor neuron sends a message away from  the CNS to an effector, a muscle fiber or a gland. An interneuron is always found completely within the CNS and conveys messages between parts of the system (Figure 3a). In addition to neurons, nervous tissue contains glial cells such as the Schwann cells covering the neurons with sheath. These cells maintain the tissue by supporting and protecing the neurons. They also provide nutrients to neurons and help to keep the tissue free of debris. The neurons require a great deal of energy for the maintenance of the ionic imbalance between themselves and their surrounding fluids, which is constantly in flux as a result of the opening and closing of channels through the neuronal membranes. Thus while the brain is only 2% of our body weight,it consumes 20% of our energy and moreover 80% of this energy consumption is devoted to maintain the imbalance. 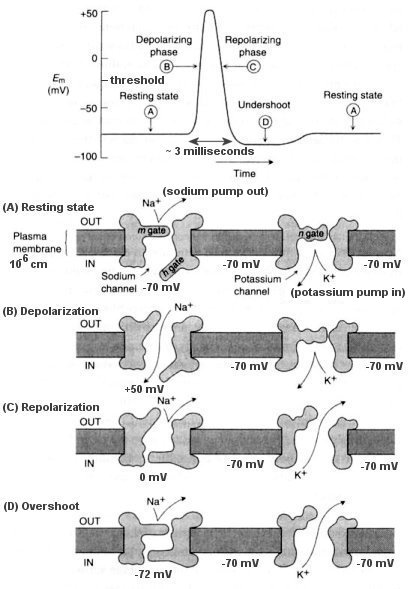 Neurons are dynamically polarized, so that information flows from the fine dendrites into the main dendrites and then to the cell body, where it is converted into all-or-none signals, the action potentials, which are relayed to other neurons by the axon, a long wirelike structure. The neuron is actually a very poor conductor; the signal drops to 37% of its original strength in only about 0.15 mm. Thus it needs amplification all along its length in the form of sodium-potassium pumps and gates (see Figure 01d). The amplification is initiated by detection of small changes in voltage across the membrane with the opening of voltage-sensitive sodium channels in the membrane of the neuron. Sodium ions rush into the neurons from the extracellular fluid, resulting in a transient change in the voltage difference between the neuron and the surrounding environment. The action potential travels like a wave from the cell body down the neuron via the repeating amplifications. Thus, the action potential enables the neuron to communicate rapidly with other neurons over sizable distances, sometime more than a meter away with a speed from 20 -200 m/sec. When the action potential reaches an axon terminal , it causes the terminals to secrete a chemical messenger (neurotransmitter), generally an amino acid or its derivative, which binds to receptors in the post-synaptic neurons on the far side of the synaptic cleft. When the postsynaptic potential has reached a specific value an action potential is triggered and the signal is passed to the next neuron.

[Go to The Neurotransmitter section)